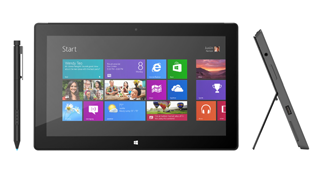 Mainelli goes on to explain how battery life is a huge issue stating it will be compared to the iPad which runs for eight to 10 hours, up to the Surface which lasts for four.

His exact quote was: “The battery life's not there. It's too heavy…while it performs like a notebook, Surface Pro is always going to be compared to other tablets, and tablets really need to run eight to 10 hours.

A second-generation Surface Pro is expected at Microsoft’s BUILD conference in June alongside a smaller 7” model to compete with the iPad mini and Android tablets such as the Nexus 7.

These latest models may arrive with Intel’s “Haswell” chips, which initially appear to double the performance of current “Ivy Bridge” chips whilst using the same power consumption, even enabling 4K video on mobile devices.

One of the main problems surrounding Surface is consumers find the models complicated, with the Surface RT running a stripped-down ARM version unable to run x86 apps.  Surface Pro on the other hand offers the full Windows 8 experience, but in a bulkier device with less battery life.

Mainelli also shares his views on this issue by saying: “Microsoft needs to decide on one operating system for tablets so they aren’t pitting their own operating systems against each other".

EnterpriseApps previously reported how the Surface Pro “is a PC” not just a “gussied up iPad look alike.” As such, the Surface Pro has access to all the apps you and your employees need; including the security to use them without worry.

Windows 8 itself has had many “teething problems” amongst both consumers and developers. But ‘8.1’ should be released alongside the new Surface models as a public preview at BUILD.

Microsoft is sure to hope this combination of new hardware, alongside updated software, will boost public confidence in the platform.

What are your opinions on Surface Pro, is it a good device? Does Microsoft have the right strategy with Windows 8 as a whole?