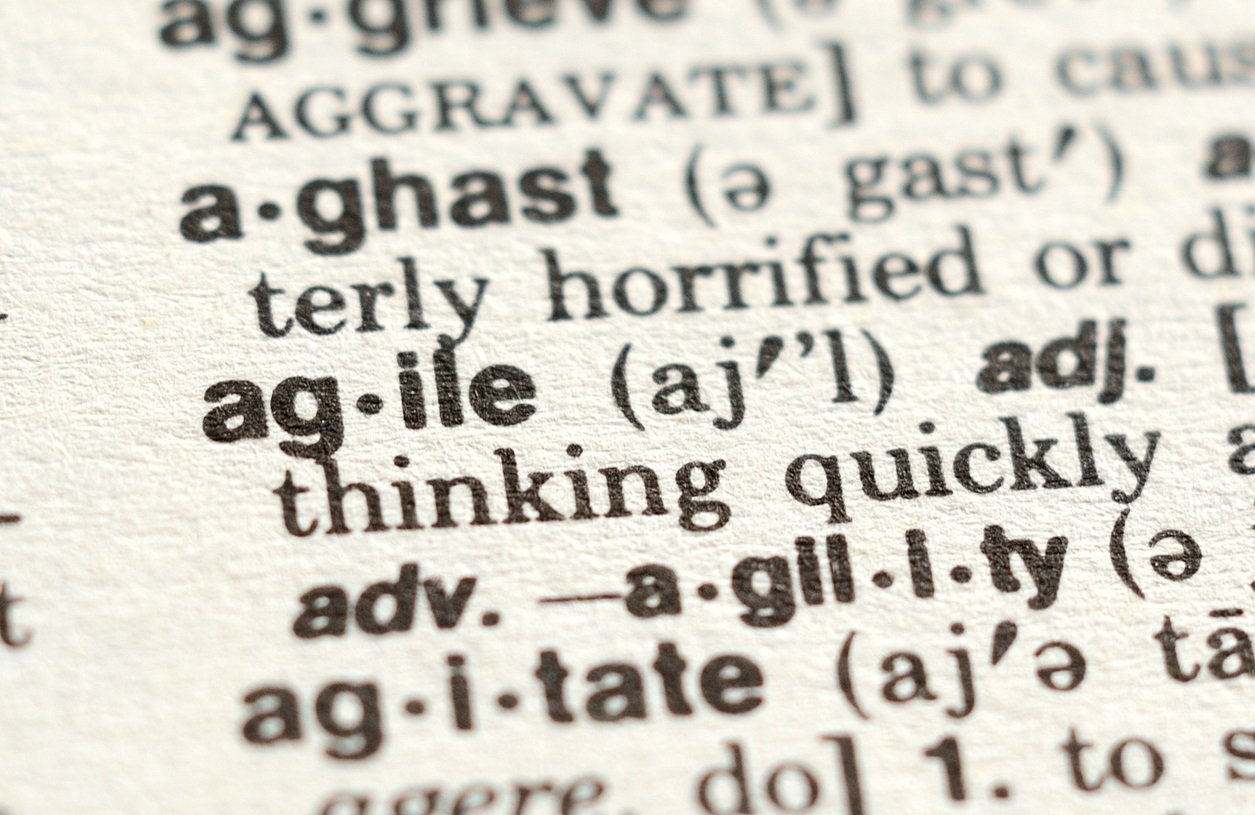 What is agile project management?

Originally pioneered in software development circles, agile is a method of managing projects using an incremental process – i.e. short development cycles called ‘sprints’. Instead of working on a big project, agile reduces tasks to smaller portions of work. You might all work on a certain feature over a two-week sprint period and release that to the public to get feedback, rather than working on all the features in one go and only releasing it as one big finished package.

Agile places an emphasis on teamwork and collaboration and reduces many of the risks that surround larger, resource-intensive projects. The idea is to roll out products, updates and new releases quickly and efficiently, drastically improving speed to market. Releasing new products and features quickly ensures that feedback is received regularly (almost on a constant basis). The upshot of this is that you improve communication with the end user—they have more influence over their favorite products, and you can tailor your product to the needs and requirements of their user base.

Although agile has been around since the 1970s, it was only really in 2001, when a group of developers published The Agile Manifesto, that the agile movement took off. There was an explosion of software companies transitioning to agile methods.

What about other industries?

In recent years, industries across the whole spectrum have moved to Agile ways of working. While there is lot of hype, many are skeptical that it can be applied outside of software development. Just as there are many success stories, there have been failures – largely because people haven’t grasped the fundamentals. These are that Agile:

Let’s have a look at some of the success stories. A well-documented example is that of NPR, the U.S. radio broadcaster. NPR found that they were spending too much time and money developing new shows, most of which would soon prove to be unpopular and be shelved after a short run. This method was unsustainable.

Agile allowed NPR to make shows cheaper and faster. Because of this, they reduced the risks involved in producing failed shows. This freed up people to come up with ideas and be creative. Customer feedback was introduced at an early stage so that it could be used to guide and build upon ideas rather than kill them.

But there are clear restrictions to agile in many industries – construction for instance. For large-scale building projects, like bridges and skyscrapers, where strict safety procedures need be adhered to, a waterfall approach makes more sense.

However, in most cases, the main obstacle to adopting agile is simply a poor understanding of the concept.

Waterfall: Agile arose from a perceived need to replace the waterfall approach – in which large projects were conducted stage by stage until completion. To illustrate this, let’s look at an example where a company is developing a new vacuum cleaner.

There are four teams working on a project – planning, design, prototyping and testing. In waterfall, these teams are unique and disparate parts of the project and their work is undertaken sequentially in isolation from each other. One can only begin when the next one is finished.

Because of the scale of the project, the planning stage at the beginning of the project is more detailed, as it is necessary to scope out the project for all the different teams from start to finish. All contingencies must be considered ahead of time, as waterfall does not allow you any freedom within the sequential order. The flow moves from planning to design to prototyping to testing, without any room for movement. For instance, testing can only begin when everything is built and up and running.

One difficulty with this approach is that any major problems that arise at the testing stage are hard to resolve. For instance, if during testing it is discovered that the vacuum cleaner is an impractical size or the handle is in the wrong place, there is very little anyone can do about it. Another is that you can spend so long working on a product or feature that, when it is finally released, there is no demand for, as the user base has moved on.

Agile: By breaking down the project into smaller sprints, agile allows all the teams – planning, design, prototyping and testing – to work simultaneously. This might involve working on a feature, getting it designed, built and tested and then released so that customers can provide valuable feedback as you go.

Quality is higher in agile because testing is carried out from the beginning. The smallest features are tested to make sure they work. This means that a fully-tested, fully-functioning whole is put together piece by piece from day one.

Constant feedback and testing reduces risks, as mistakes are made early and learnt from. This gives project managers the freedom to use their resources more freely – to let them collaborate, be creative and try out new things. There is a lot more transparency and resource visibility for project managers.

Agile and the digital workplace

So, why is agile making such a stir today?

In a world where digital and mobile technology is revolutionising how people work, Agile makes a lot of sense. Collaboration is at the forefront of digital transformation, as new technology makes it easy for people to work remotely and flexibly. Not only do organisations need to bring in the right tech to make this possible, they need the right project management methodologies. Agile is key to this, and that’s why so many organisations are turning to it.